Elevate Your Aviation Marketing: Soaring Above the Competition

The number of airports across the country is increasing by leaps and bounds. According to the United States Department of Transportation, the total number of public and private airports in the US grew by 29% between 1980 and 2017.

Thanks in part to increased marketing efforts – and selling points – airports are no longer viewed as a place to be endured during the traveler journey, but rather, a destination in their own right. From an investment in ambiance (e.g. aquariums and yoga rooms), to increased flexibility and affordability, airports are improving their tactics to attract travelers.

With this influx of amenities and increasingly competitive fares, how can airport marketers appeal to travelers and stand out against their competition? Below, we explore how two airports, Appleton International Airport and Auckland Airport, did just that.

Located between Green Bay and Milwaukee in central Wisconsin, Appleton International Airport (ATW) had recently rebranded and added several new routes. Despite the changes, they had not received the anticipated volume of bookings for both their established and new routes.

To drive more flight bookings, we worked with ATW to create a campaign promoting new routes to already popular destinations and highlight rates that were more cost-effective in comparison to other, nearby airports. ATW believed that showcasing these routes could ultimately drive demand for the airport and raise its brand awareness.

ATW connected with their audience by timing their campaign based on proprietary search and booking data. Knowing that the airport had regional appeal, their strategy targeted shoppers located in Appleton, Green Bay, Wausau-Rhinelander, and the Milwaukee metropolitan area. The campaign also targeted shoppers who were either currently searching for or had recently searched for popular spring break destinations such as Las Vegas, Orlando, Tampa/St. Petersburg, or Phoenix.

ATW wanted to reach customers at all phases of the path to purchase—from inspiration to booking. To achieve this, they: 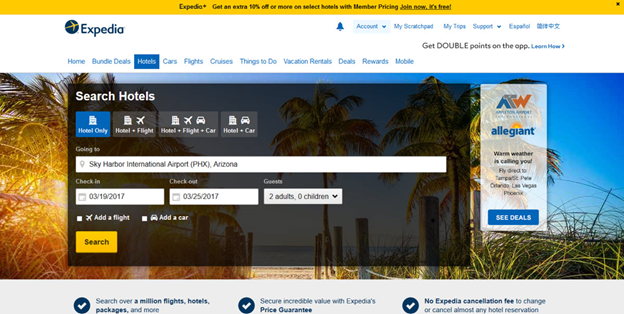 A 40% year over year increase in demand for air tickets. “Expedia brands have become a core component of our marketing program,” said Patrick Tracey, Marketing Director, Appleton International Airport. “The dramatic increase in airline sales was beyond our expectations and helped to drive our best year in history.”

Award-winning Hawaiian Airlines sought to increase market share of booked flights from its US hubs to Auckland. They collaborated with Auckland Airport and MasterCard on a campaign.

Hawaiian Airlines, MasterCard, and Auckland Airport worked with us to create an integrated advertising campaign that targeted US shoppers across all Expedia Group US points of sale. The campaign incorporated display advertising, email marketing, and Passport Ads, a form of audience extension.

These are just two of the many success stories from airports that have connected with more passengers and driven tangible results by leveraging digital advertising campaigns.