How do you combine the social muscle of a service such as Twitter with a travel brand in order to increase awareness of a destination? Add images of renowned masterpieces, the power of crowdsourcing and a chance to win a trip to Holland.

As part of a broad program to promote Holland and its year-long celebration of artist Vincent Van Gogh, the Netherlands Board of Tourism and Conventions (NBTC) invited the world to experience cultural events, exhibitions and tours throughout the year in areas most associated with the artist – such as Brabant, Gelderland and Amsterdam. To raise awareness with travelers online, NBTC partnered with us to orchestrate an engaging social community campaign from March 2 to April 12 to travelers in the UK, France and Germany. By leveraging the power of Twitter – specifically its “Flock to Unlock” mechanism – the campaign captivated audience and drove interest in experiencing the life of the post-impressionist painter and the inspiration he left behind.

Twitter’s “Flock to Unlock” mechanism incentivizes followers to spread a message by tweeting and retweeting to unlock exclusive content or rewards. In this instance the challenge was for users to collaboratively tweet and retweet the #VanGogh2015 hashtag, to earn brush strokes that revealed six of Van Gogh’s famous works of art and a chance to win a trip to the Netherlands. 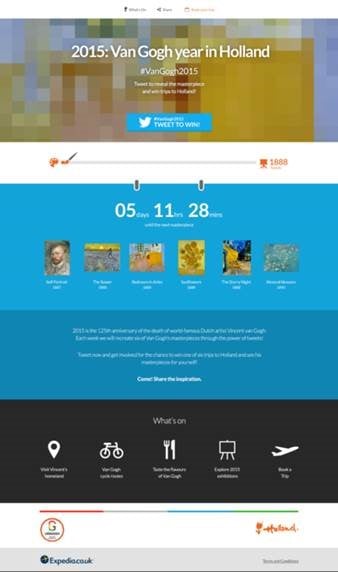 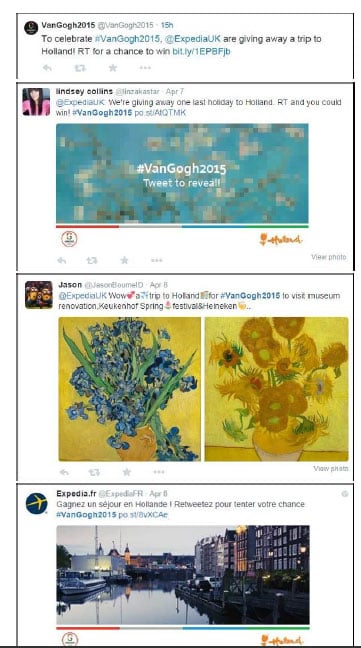 Proving the value of this mechanism coupled with a media buy that ran on targeted Expedia points of sale, the campaign drove double-digit growth in demand to the Netherlands over the six-week period. Twitter impressions reached 2.2 million and engagement exceeded 22,000. The campaign has also been shortlisted for the Digital Impact Awards and the UK Social Media Communications Awards.

The collaborative element of the task, which leverages crowdsourcing rather than engaging with content individually, can be a really powerful draw for many brands – especially for campaigns that look to promote activities such as travelling or sightseeing where people often share their experiences with others.

Getting all those elements of the campaign right is no easy task, but “Flock to Unlock” can be an effective tool for destinations to spread their message and inspire future interaction and visitors.

Tnooz published a version of this piece on April 27, 2015